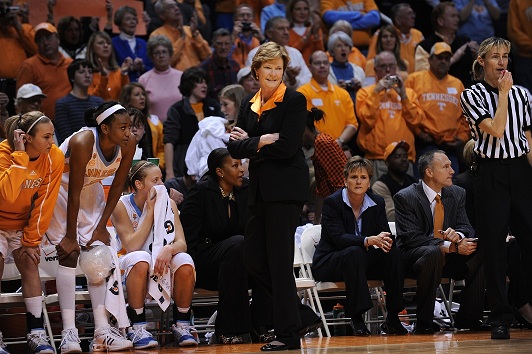 When Pat Summitt found out she had early onset dementia, she reacted like anyone would with anger, tears and sadness. But then she did what made her an icon. She followed her own mantra: Left foot, right foot, breathe.

Summitt, along with her son, Tyler Summitt, formed the Pat Summitt Foundation in the fall of 2011, just a few weeks after the Aug. 23, 2011, public announcement that she had Alzheimer’s disease. As she told her Tennessee players about the diagnosis, they reacted with shock, confusion and tears. Lady Vol senior Vicki Baugh stood up and said: “Pat, we’ve got your back.” And with those words, “We Back Pat” became a movement.

Her life story begins in a small town in Middle Tennessee called Henrietta, where Patricia Sue Head Summitt – known as “Trish” to her family and friends – harvested tobacco, milked cows, cut hay on a tractor and loaded bales into the barn on the family’s farm. It was the same barn where she battled her brothers on a makeshift basketball goal and learned that nothing replaced hard work.

Basketball would take her to The University of Tennessee at Martin, the U.S. Olympic team as a player in 1976 and head coach in 1984 and, of course, The University of Tennessee. Summitt expected to arrive in Knoxville in 1974 as a graduate assistant in health, physical education and recreation to teach and work on her master’s degree while training for the 1976 Olympics and recovering from major knee surgery.

But before Summitt departed UT Martin with her bachelor’s degree, she received a letter from Helen B. Watson, a professor and chair of UT’s Physical Education for Women, dated April 10, 1974. The current women’s basketball coach, Margaret Hutson, had asked to step down, and Watson wrote: “I am hoping that you will be willing to accept this assignment.”
The rest, of course, is history. Summitt coached for 38 seasons at Tennessee with an overall record of 1,098-208 and won eight national championships in 1987, 1989, 1991, 1996, 1997, 1998, 2007 and 2008. Tennessee won 16 SEC regular season titles and 16 SEC Tournaments. Summitt’s graduation rate for players who completed their eligibility at Tennessee was 100 percent, the stat she was most proud of during her tenure as head coach.

Summitt became the gold standard not just for women’s basketball, but also for leadership and empowerment of women. The Pat Summitt Plaza and statue in homage to the coach is across the street from Thompson-Boling Arena and Pratt Pavilion in a high-visibility location to every visitor, student, fan, faculty member and administrator who comes on campus.
During the statue dedication on Nov. 22, 2013, the Lady Vols head coach emeritus emerged from Pratt Pavilion followed by dozens of players, coaches and staff. They crossed the street behind Summitt and lined the back wall of the plaza, at times cheering, at other times wiping away tears.

“Today is not about me,” Summitt said. “It is about everyone out here that loves the University of Tennessee. I just hope and pray that we can continue to do great things. I want everybody to know how much I appreciate what has happened here today. I don’t think I will ever forget it. I love you all.”

On that gray November day when a light rain fell just before and then immediately after the dedication, Summitt was still able to speak for herself – and in typical Summitt fashion, she credited other people.

When Summitt was diagnosed with early onset dementia, she didn’t retreat into the shadows. She boldly coached another season, knowing the scrutiny that would come, and cried on April 18, 2012, the last evening she was officially the head coach of Lady Vols basketball. The news conference to formally announce her retirement was held April 19, 2012. Summitt read from a prepared statement that day and also fielded questions from the media at an event that was airing live on national television. It was one of those days in which Summitt seemed like herself.

But Alzheimer’s disease is a cruel thief. Of memories. Of time. Of love. A little over four years later in late June, she was near death with waves of former players coming to tell her goodbye.

Summitt’s passing on June 28, 2016, just two weeks after her 64th birthday, gutted those players, her colleagues, the Tennessee faithful and everyone connected, even in the smallest of ways, to the legendary coach.

Longtime sportswriter Maria M. Cornelius covered Summitt’s “Celebration of Life” service on July 14, 2016, an account of which captures the impact of the iconic coach: There goes our friend.

While “our friend,” has left, she also left a legacy. The Pat Summitt Foundation will live in perpetuity.